Why’s the smile of elder Joseph of Vatopedi from eternity?

A few hours after the entombment of elder Joseph, you posted at your website an article with the title «Funeral of Blessed Elder Joseph of Vatopedi – A Smile From Eternity«, describing in a few words the event aided by a few pictures. [transl’s note: original greek article]

The photograph of the reposed, who is smiling not only with his lips but with all the expression of his face, made  a great impression on people, which we can see  from the articles and comments in numerous web-sites.

One can indeed come across dead people with a glowing face, a peacful expression, but with never a smile. On the one hand all the spiritual fathers say that the time of death is horrifying for man. On the other hand we read in the book of the Sayings of the desert Fathers that even the most advanced ones , out of humility, did not let down their guard before enter eternal life, where there is no longer any danger.

In addition, Elder Joseph had a major heart problem and he was very debilitated by this illness. So how did he repose smiling?

The answer is: NO, he didn’t repose smiling, but HE SMILED AFTER HIS REPOSE.

After a conversation of us with some fathers of the monastery, we convey to you the story of the event.

The two monks that were with him until the very last moment, sprinted to the abbot, Elder Ephraim, to let him and the rest of the fathers know about the repose of Elder Joseph and the former two didn’t pay attention to the reposed, who was left with his mouth half-open. 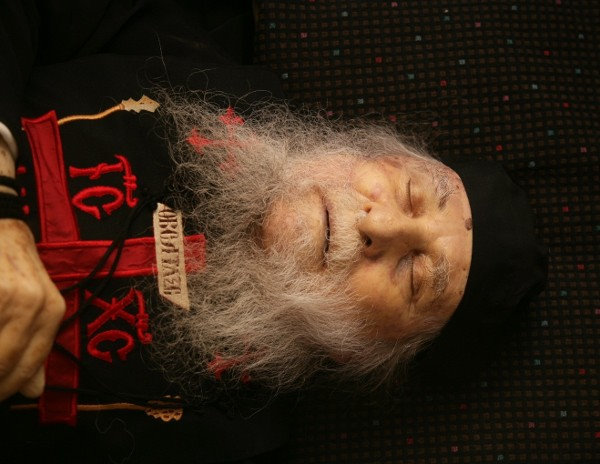 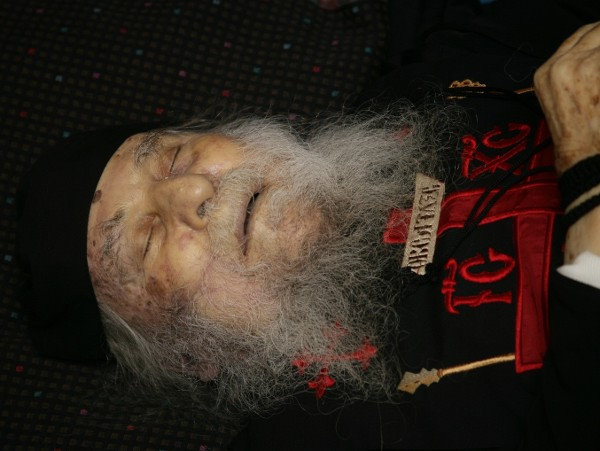 Thus, they came back to the cell, to prepare the reposed according to the monastic. Elder Ephraim ordered them to leave his face uncovered. The fathers tried to close his mouth, but as it was quite late, his mouth remained open. They even tied a gauze around his head, so that his mouth would remain closed, but after they removed it his mouth opened up again. About 45 minutes had already gone, by since he had passed away.

-Elder, what should we do, it looks bad with the  mouth open?

-Leave him as he is, do not cover his face!

They sewed him inside his monastic mantle as according to monastic custom. The whole procedure so that he was put inside the mantle and sewed in took another 45′. Then, they cut off the cloth around his face –according to the order- and found the elder as everybody can see him now, smiling.

Did he listen to them and granted them this litle favour, so that he didn’t hurt their feelings? Or, was it that he wanted to grant us an indication what he saw and let us know the state in which he is now?

The smile of elder Joseph of Vatopedi, is the first supernatural event after his repose and has become a great consolation for everybody.

Ένα Σχόλιο to “Why’s the smile of elder Joseph of Vatopedi from eternity?”