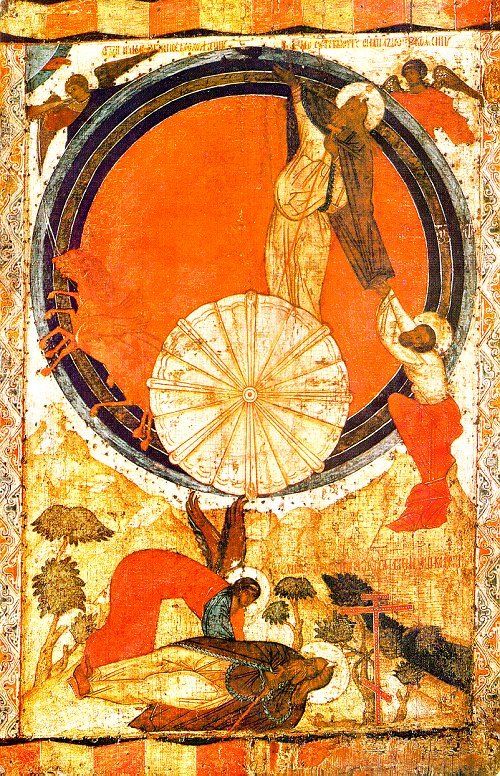 After Solomon died, his kingdom was divided, and most of the men who ruled were not wise and great leaders. But there were still a few leaders who listened to the words of the Lord and told the people to do what was right. These people were called prophets. One of these prophets was Elijah, who lived while Ahab was king of Israel.

King Ahab was married to a woman named Jezebel, who worshipped the false god Baal. Ahab also turned to Baal, and even built an altar to him. This made God angrier at Ahab than he had been at any other king. Elijah went to Ahab and told him, «As truly as I serve the Lord, there will be no rain in this land until I say so.»

For three whole years there was no rain. For these three years, Elijah hid, while the Lord protected him. Then the Lord came to Elijah. «Go, speak to Ahab again,» the Lord said, «and I will send rain.»

When Elijah came before the king, Ahab asked, «Are you the troublemaker who brought this dryness to the land?»

«You are the one who brought trouble to the people of Israel because you follow false gods,» answered Elijah. «Now gather the people and the false prophets of Baal on Mount Carmel.»

On the mountain, Elijah spoke to the prophets of Baal and the people. «How long will it take you to decide between God and Baal?» No one answered him. «We will find out today who the true God is,» Elijah said. «Let all four hundred and fifty prophets of Baal choose a bull and prepare it for a sacrifice, but let them not make a fire. I will do the same thing. Then we will pray–all of them to Baal, and I to the Lord. The god who answers with fire for the sacrifice is the true God.»

The people agreed, and the prophets of Baal built their altar, and laid their offerings on it. From morning until noon they prayed to their god, but nothing happened.

«What is the matter?» asked Elijah. «Is Baal busy talking with someone else, or is he sleeping? Perhaps you should pray louder.»

From noon until evening the prophets called out loud, and they even cut their arms with knives to show their love for Baal. Still nothing happened.

«Now come nearer to me,» Elijah said to the people. Then he prepared his sacrifice. When the altar was ready, he called for twelve barrels of water, and soaked the wood with them. «God of Abraham, Isaac, and Israel,» Elijah prayed, «hear me, so that the people may know that you are the true God and will follow your words once again.

Suddenly a fire came down from heaven, burning up all the meat and wood, and even the stones of the altar and the water. When the people saw this, they threw themselves face down on the ground. «The Lord is our God.» they cried.

Then Elijah told them, «Kill these false prophets, every one of them; do not let a single servant of Baal escape.» When this was done, a small cloud no bigger than a man’s hand formed over the sea. Soon the skies were black with clouds, and a great rain fell.

When Ahab told Jezebel what had happened, the queen was furious. She immediately sent word to Elijah that she would have him killed, just as he had killed the prophets of Baal.

So Elijah fled to Mount Horeb, and hid inside a cave, where, exhausted, he fell asleep. When he awoke, a voice asked, «Why are you here, Elijah? Go outside and meet the Lord.»

«Why are you here?» the Lord asked.

«I am here because of my love for God,» Elijah answered. «The people of Israel have turned away from you. All of your prophets have been murdered. I am the only one left, and now Jezebel wants to kill me.»

So Elijah left Mount Horeb and found Elisha plowing his father’s fields. All that Elijah had to do was touch the young man with his cloak, and Elisha knew that the Lord had called him. «Wait while I kiss my mother and father good-bye,» said Elisha. «Then I will follow you.»

From that day on, Elisha served Elijah, until at last it was time for the Lord to take Elijah up to heaven. The two men were in Gilgal. They traveled to Bethel and then on to Jericho. As they reached each city, Elijah said, «Stay here, Elisha, for the Lord wants me to travel on.» But each time, Elisha refused to let Elijah go on alone.

Finally they came to the Jordan River, with a small group of followers. Elijah took off his cloak, rolled it up, and touched the water with it. The waters parted, and Elijah and Elisha crossed to the other side. As they stood by the riverbank, Elijah asked Elisha. «Is there anything you would like from me before I go?»

«I would like to have twice your spirit and faith.»

«What you ask for is not easy,» said Elijah. «But if you see me as I am taken away, you will have it.»

Just then a chariot of fire, pulled by horses of fire, appeared and drove between them. Elijah was carried up by a whirlwind to heaven, and Elisha saw it. «My father, my father!» he cried. «The chariot of Israel and its horsemen!» Then Elijah was gone.

Elisha pulled at his own clothes and tore them to shreds. Then he picked up the cloak that had fallen from Elijah’s shoulders and, dipping it into the waters of the Jordan, asked, «Where is the God of Elijah?» As he spoke, the waters parted, and Elisha crossed back to the other side. There he joined Elijah’s followers, who saw that the spirit of Elijah was in Elisha and bowed before him.