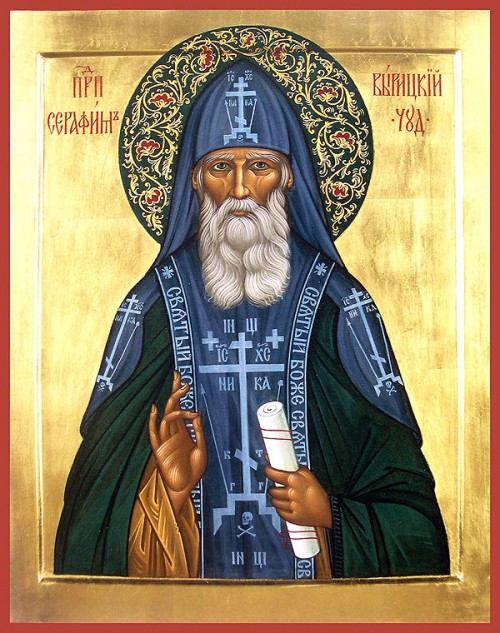 Basil Muraviev (the future St Seraphim) was born in 1865 in the town of Cheremovsky in the Yaroslavl province. His parents, Nicholas and Chione, were peasants. When Basil was ten years old, his father died, and he was left to care for his ailing mother and his sister Olga.

A kind neighbor took Basil with him to St Petersburg, and found him a job as a store clerk. The boy had a secret desire to become a monk, so one day he went to the St Alexander Nevsky Lavra to speak to one of the Elders about this. The Elder advised him to remain in the world and raise a family, then after their children had grown, he and his wife were to serve God in the monastic life.

Basil accepted these words as the will of God, and so he lived his life as the Elder had directed. Returning to the store, Basil continued to work and send money home to his family. When he was twenty-four years old, Basil married his wife Olga.

He started his own business as a furrier, and became very wealthy. He had a son, Nicholas and a daughter, Olga. After their daughter’s death, Basil and his wife agreed to live together as brother and sister from that time forward.

When he was around thirty, Basil gave away most of his wealth, donating money to various monasteries. When Nicholas was grown, Basil and Olga went to monasteries to serve God. Olga was tonsured in 1919 with the name Christina, and lived in the Resurrection-New Divyevo Monastery in St Petersburg. Later, she was tonsured into the schema and was given the name Seraphima. She died in 1945.

We do not know where Basil received monastic tonsure (some say it was on Mt Athos), nor the new name he was given at that time.

In 1927, he arrived at the St Alexander Nevsky Lavra, where he became Father Confessor to the monks. There he was tonsured into the schema with the name Seraphim. Soon it became apparent that St Seraphim had received from God the gifts of clairvoyance and healing, and many people came to him seeking his help and advice.

Bishop Alexei (Shimansky) of Novgorod came to the Elder in 1927 to ask if he should leave Russia, since many bishops and priests were facing arrest and execution under the Communist yoke. Before the bishop could utter a word, St Seraphim said, «Many now wish to leave Russia, but there is nothing to fear. You are needed here. You will become Patriarch and will rule for twenty-five years.»

A time of trial came for the Lavra. Monks were arrested, exiled, and sent to labor camps. Many of them were executed. Beginning in 1929, the Elder was arrested fourteen times. He continued his priestly ministry in the prison camps, where he strengthened and encouraged his fellow-prisoners.

In 1933, the Elder returned from the camps and settled in Vyritsa. This was a very beautiful place with forests and a river, and it was known for its healthy climate. St Seraphim’s health had deteriorated in the prison camps, and he had been beaten many times.

A wooden church in honor of the Kazan Icon of the Most Holy Theotokos had been built in Vyritsa in 1913 to commemorate the three hundredth anniversary of the Romanov dynasty. The upper church has two altars: one dedicated to the Kazan Icon, the other to St Nicholas. The lower church was dedicated to St Seraphim of Sarov.

After he had recovered somewhat, Fr Seraphim began to receive visitors who came seeking advice and comfort from him. Many of those afflicted with illness received healing by his prayers. The authorities soon noticed the great numbers of people who came to him. His cell was searched many times, usually at night. Once, the police came to arrest the Elder, but a doctor told them that Fr Seraphim would not survive the trip because of his many infirmities. They decided to leave him alone, and so the Lord preserved the life of His servant.

The Germans entered Vyritsa in September of 1941, but no one was harmed, and there was no looting. During the War, Fr Seraphim became weak and now served only rarely in the chapel of St Seraphim. Starting in 1945, Fr Alexei Kibardin began serving in the Kazan church.

By the spring of 1949, St Seraphim was very weak and had to remain in bed. Still, he permitted visitors to come to him as before.

Shortly before his death, the Most Holy Theotokos appeared to St Seraphim and told him to receive Holy Communion every day. Fr Alexei Kibardin would bring him Communion at 2 AM, but once he overslept and did not come until 4 AM. He apologized to the Elder for his tardiness, and noticed that there was a certain radiance around the saint. The Elder said, «Father, do not worry. The holy angels have already brought me Communion.» Seeing his face, Fr Alexei knew that this was absolutely true!

The Elder told Fr Alexei to go to Moscow and inform Patriarch Alexei I that he would depart to the Lord in two weeks. When Fr Alexei relayed the message, the Patriarch turned to the holy icons and crossed himself. When he turned around again, tears were streaming down his cheeks. «I have been Patriarch for four years,» he said. «Twenty-one years remain to me. This is what the holy Elder told me.» Patriarch Alexei died in 1970, just as St Seraphim foretold.

St Seraphim departed to the Lord on March 21, 1949 (April 3 N.S.). In the hours before his death, he asked that the Akathists to the Most Holy Theotokos, to St Seraphim of Sarov, and to St Nicholas be read. For a week after his blessed repose, a sweet fragrance permeated Vyritsa.

St Seraphim was buried in the cemetery next to the church of the Kazan Icon in Vyritsa. Great throngs of people came for the funeral, and Vyritsa became a place of pilgrimage.

The schemamonk St Seraphim was glorified by the Church of Russia in August of 2000.