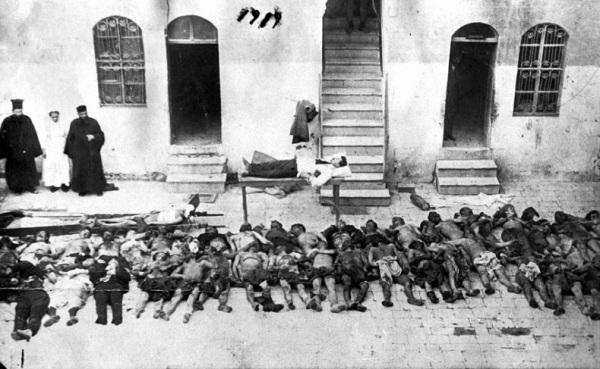 During 1894-1923 the Ottoman Empire conducted a policy of Genocide of the Christian population living within its extensive territory. The Sultan, Abdul Hamid, first put forth an official governmental policy of genocide against the Armenians of the Ottoman Empire in 1894.

Systematic massacres took place in 1894-1896 when Abdul savagely killed 300,000 Armenians throughout the provinces. Massacres recurred, and in 1909 government troops killed, in the towns of Adana alone, over 20,000 Christian Armenians.

END_OF_DOCUMENT_TOKEN_TO_BE_REPLACED

Head of the Modus Vivendi Centre

Turkish commentators cannot understand why a photograph of Ataturk was included in a drawer filled with incriminating documents. Some believe that it might have something to do with his involvement in the genocide of the Armenians and Greeks.

The world has many things to say about Wikileaks nowadays, because Wikileaks has much to say about the world. Numerous cables notwithstanding, the following is of note: a picture of Kemal Atatürk came up in a desktop wallpaper available for download from the website portraying various scandals…

END_OF_DOCUMENT_TOKEN_TO_BE_REPLACED

On September 6 and 7 in 1955 in the Turkish cities Istanbul and Izmir were organized the massacres of the Greek population, which later turned into Armenian as well. The tragic events of those days are known as «Night of Istanbul massacres» or «Night of national extermination in Constantinople.”

The massacres of the Christian population have been carried out by the Turkish authorities in response to the demand of the Cypriot Greeks to recognize their independence and to connect it with Greece.

END_OF_DOCUMENT_TOKEN_TO_BE_REPLACED

Sweden’s largest political party took a decision on Thursday during its annual convention to acknowledge the genocide of Assyrians, Greeks and Armenians during World War one. The genocide, called Seyfo in Assyrian, occurred between the years 1914-1918.

«I was very moved when the decision was taken,» said Yilmaz Kerimo, who is an Assyrian and a prominent member of the Social democratic party. «It is a positive standpoint and a great step forward. The party will now work for the recognition of the genocide within Sweden, in the European Union and the United Nations.»

By: Alyssa A. Lappen

In 1955, a little-known war was launched on the Greek population of Istanbul.

For 50 years, historians, diplomats and state department officials have touted Mustafa Kemal Ataturk as a great secular leader in a predominantly Muslim region, whose policies modernized and democratized Turkey, shaping it into a Western-style state. But Ataturk was western only insofar as he implemented the Turkification of Gobineau, wherein he substituted the Turks for the Aryans, whose ideology had terrible results in the rise of European Nazism. Regardless, in 1955, barely 17 years after the dictator’s death, a little-known pogrom, driven primarily by Islamic fanaticism, targeted the Greek population of Istanbul, with the intent of driving non-Muslims from Turkey. END_OF_DOCUMENT_TOKEN_TO_BE_REPLACED

A historical day in St. Mary Church in Gütersloh. A day that will never more be forgotten: August 30, 2009. A day of forgiveness, when finally also the Germans spoke out an apology for the devastating crimes, emerged as genocide of 1914/15 against the Assyrians, Armenians and Greeks – as it was already done by Philip Kiril Prince of Prussia 10 years ago for the Armenian people in a letter to the Armenian Embassy.

Around 250 Assyrians have assembled in the church hall of St. Mary Church in Gütersloh. Cameras and Spotlights built up, a curious crowd of people in view of the guests of this day. Sabri Atman from Seyfo-Center in Sweden, the Kurdish activist for human rights and writer Berzan Boti, and Ingrid Seigis, director of Human Rights Organization Christian Solidarity International (CSI) Germany.

HOUSES OF CHRISTIANS IN ISTANBUL MARKED WITH RED AND GREEN LABELS

Christian houses in Ferikoy und Kurtulus, areas in Istanbul, where  many Armenians and Greeks live, were marked with red or green labels  in the past weeks.

Kurdish representatives in the Turkish parliament requested  clarification after Agos, Istanbul based Armenian newspaper, had  reported about the incident. It is still unclear who was behind the action.

Agos editor Aris Nalci confirmed to the Austrian news-source, Der  Standard, worried and mainly older members of the Armenian community  called the newspaper and reported about the fact of small red or  green papers hung on their houses. After Agos investigated, they noted that about 100 houses in which, not always but very often,  Armenians still live were plastered with these labels.

«We do not know what all this means,» Nalci said, but some people are  worried. Demands at the city administration and the police brought no results until now. «Nobody knows about it,» says Nalci. «It can be a bad joke; it can however also have a serious background,» said Nalci.

The indictment against the nationalist Ergenekon group is accused of having planned a coup against the government of Prime Minister Erdogan, including planned attacks on Armenians as a tool for targeted destabilization. END_OF_DOCUMENT_TOKEN_TO_BE_REPLACED