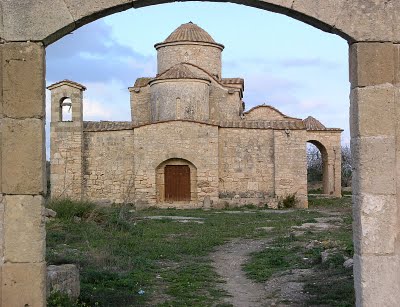 In Lythrangomi, a small village of the Ammochostos region in the Turkish occupied Karpasia peninsula,  one may find a rare specimen of the 6th century BC: The Church of Panagia Kanakaria. It is a monastery church which is devoted to the Virgin Mary and is situated at the far western corner of the village. END_OF_DOCUMENT_TOKEN_TO_BE_REPLACED

1. A miracle performed to a Turk forester.

This event was conveyed to me by elder Christodoulos, when I was at the Saint Onoufrios Seat and was helping father Ierotheos, who was a gardener, on June 12th, 1944. Father Christodoulos remembered this event, which took place during the Turkish occupation of Greece around 1910, and passed it on to honor the memory of Saint Onoufrios. read more… END_OF_DOCUMENT_TOKEN_TO_BE_REPLACED

European Parliament Resolution – a Clear Message to Ankara about Cyprus

The European Parliament’s resolution on Turkey’s progress report for 2009, which was approved Wednesday, constitutes a clear message to Ankara to immediately implement its obligations which concern the Republic of Cyprus. This was stated Thursday by Government Spokesman Stephanos Stephanou, noting that the EP’s resolution is the most powerful one which Cyprus has achieved lately.

The resolution, he said, is one more political tool for the Greek Cypriot side in the struggle for the achievement of a solution in Cyprus that would end the Turkish occupation and reunify Cyprus and its people.

“The resolution underlines the need for Turkey’s active support for the achievement of an overall settlement of the Cyprus problem. Basically, the European Parliament urges Turkey to contribute actively to the solution of the Cyprus problem, reviewing its Cyprus policy so far”, he underlined. END_OF_DOCUMENT_TOKEN_TO_BE_REPLACED